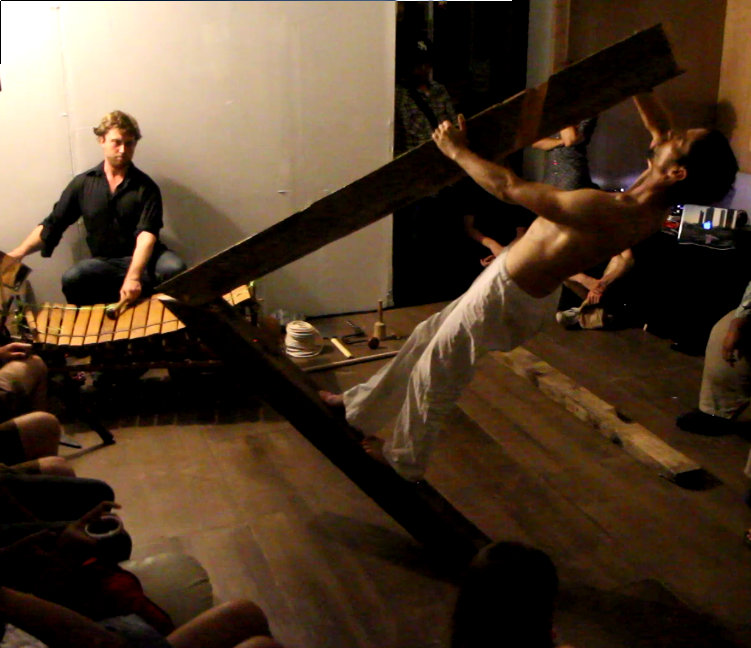 Alexander G. Lyle IV – does his best to avoid classification. At the age of 15 he became a residency student with the North Start Ballet in Fairbanks, Alaska, a choice that would blossom into a ten year career as a dancer working in styles as disparate as classical ballet, modern, Butoh, and Kathak dance drama, performing in venues ranging from the Metropolitan Opera House to The National Center for The Performing Arts in Mumbai, India, the Roman Forum, and various dusty third world streets. He also is a graduate of New York University with degrees in Dance and South Asia Studies. In 2004 Alexander apprenticed under Master Stone Sculptor Devraj in Mahabalipuram, India. In 2006 Alexander transitioned out of dance to focus on performance art and Installation while also developing a career in film as an art director. In 2010 he performed at the MoMA in “The Artist is Present” the three month retrospective of performance artist Marina Abramovic during which he performed roughly 140 hours of the work “Point of Contact” among others. Also in 2010 Alexander worked with Brazilian artist Bob N. on a installation/performance for the Sao Paulo Biennial. In 2011 he was a featured artist in residence at Robert Wilson’s Watermill Center. In 2013 Alexander had his first solo exhibition in New York with the installation and performance work “The Shape of Time”. His Sculpture “Spiral Chapel” created for an exhibition at Gallery P3 (Las Vegas, Nevada May 2015) will soon be a permanent public sculpture in Las Vegas, Nevada.  His 2016 medium scale work “Immeasurable Distances” is in the permanent collection of Prince Abhimanyu and is installed in his Alsisar Palace (Alsisar, Rajasthan India) along with the 2018 temporary installation “Loitering At The Edge of Our Time”.  Alexander currently works out of his studio in Brooklyn, NY.